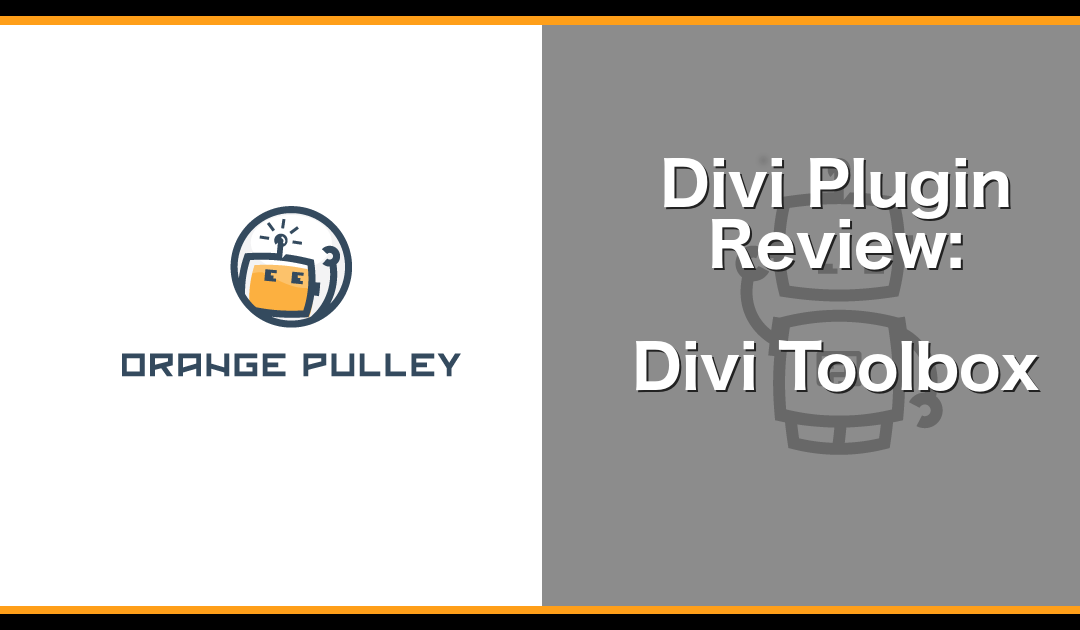 I’m not affiliated with Divi Lover or Divi Toolbox.

I don’t know Ania and other than 1 support ticket I opened with Divi Lover, I’ve never communicated with her.

What I do know is she was the first video I watched showcasing Divi hooks. (I am fully aware there are others, but she happened to be the first one I saw…) and as a computer science major, I have a particular heart for Divi’s developer release and had been waiting to see some plugin action show up around it.

But I’ve also been waiting for a plugin which did more than one thing because ‘Merica!

But also because it’s always made sense to me.  It’s the same basic model Elegant Themes launched with years ago – lots of themes (i.e. features) for one price.  Divi does the same thing.  Lots of things for one price.

So basically the day Divi Toolbox came out I bought it.  I may never use it.  But I like it.  And I wanted it.  So I bought it.

Like many Divi users, I have purchased lots of plugins that do (1) thing.  None of which, by the way, have made my standard deployment and most, if not all, of which I rarely use.

Looking back, in fact, I’ve bought these Divi specific plugins over the years:

So why’d I buy them?

Mostly because I value my time and all of do something that saves me time.  And the price point for almost all of them is, I feel, super reasonable.

If I made a quick list of why I purchase them it’d be:

So why don’t I use them?

It’s definitely not an issue with the plugins.  All of them worked as promised and the support has always been great from all of them.  But at the end of the day, I’m more of a ‘less is more’ kind of guy and I’ve never really trusted any of them because ‘Divi!  I never liked relying on something-not-me injecting some code somewhere on my site so that one day I updated Divi and BAM, white screen of death!

I could just never bring myself to use plugins that did not rely on a software developer’s documentation / API.

Since Divi 3.1 that’s been available and so my trust issues are a thing of the past.  Or, at least, for developer resources I trust.  Of which Ania has become one.

What is Divi Toolbox?

Straight from the DT homepage, Divi Toolbox “empowers you to achieve effects which normally can only be done with custom CSS, PHP or Javascript! Now, you’ll be able to easily make these changes in the Divi Theme Customizer. Make your website awesome without any coding skills!”

That’s fine.  They are selling the ‘scared / do not know how to code’ people, but I’m after time savings.  I want to get cool effects and features fast and standardized.

It’s why I manage my own child theme, with the classic functions.php changes and a few header.php modifications and, of course, a good deal of CSS in style.css that I use over and over.

But what a mess!

I mean, I’ve never liked using Child Themes.  My understanding is its the standard/best/only way to protect your custom changes, but does anyone actually copy over the latest parent php files and re-make their modifications every time they update?  And if you don’t know what that means, then just pretend you didn’t read that and carry on.

And how much my CSS have I built and no longer use?  A lot.  That’s obviously all on me, but still….

Anyway, the point is Divi Toolbox does pretty much exactly what it says in the name – it does a bunch of things, not just one.  And several are things I did myself with my child theme.  My hope is by the end of this review, all my stuff will be no more.  And Divi Lover / B3 Multimedia will never break my stuff.

Buy it, install it, activate it.  RTFM, Dudes.

(I mean, seriously, EVERY blog post has this as a heading and they put cute screenshots on the installation, but, it’s almost literally the exact same installation and activation process for any other plugin / license-able product out there.  I refuse to walk anyone through doing that, but I do care about SEO so I gotsa have that SEO tag that, at least, tells the bots out there that I’m serious about this review…)

Placement of the Plugin Settings

First, I love the Divi Toolbox settings are neatly contained in the Divi section in the admin bar. 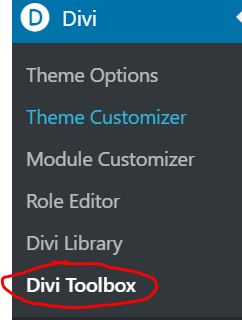 I think this should be a standard for any Divi Plugin.

Why?  Because it’s a DIVI plugin.  Sheesh…

Toggle Things On/Off, Customize them in the Customizer

But rest assured Divi Toolbox is more like this:

The way this is handled is you have to first enable a feature with a toggle and then you can customize it in the Theme Customizer.

I’m only going to review a few of the ones that I think are awesome because they are things I’ve done with other code and can now use this toolbox, but you’ll have to scroll down for that, because at the end of the day, what’s better than hearing it from the source?  That’s rhetorical.  The answer is nothing is.  And for me to try would be a waste of time, which I’ve pointed out several times, I despise…

So if you really want to see all the features, then head over to Divi Lover and watch the well done 40m video…or just hang out here and watch it.

For the life of me I don’t know why this isn’t support, yet, but if you want to upload SVG files to WordPress, you have to add this to your functions.php file: 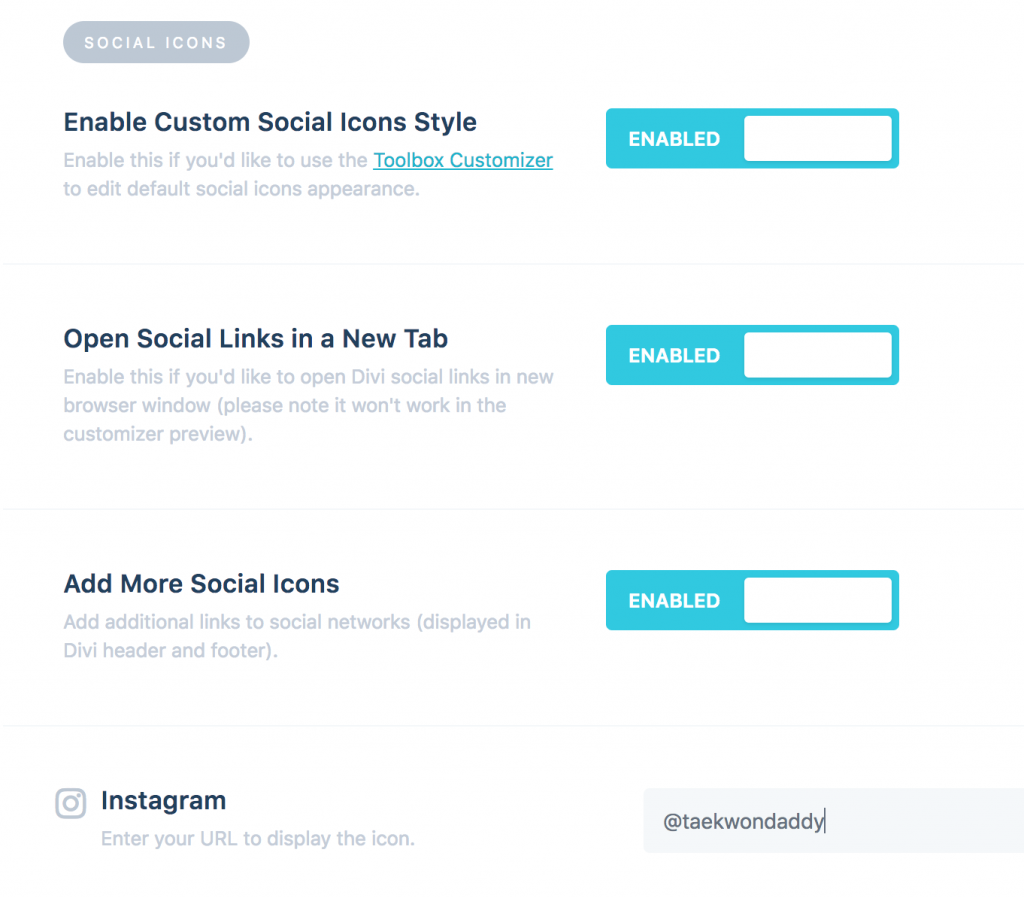 Then head over to Appearance –> Customize and go to

Now, one problem I found was the alignment was off on hover background:

It actually looks kinda cool as an image, but no bueno when hovered over…

I didn’t want to troubleshoot this, so I simply set the hover background to transparent black and added a ‘grow’ hover option and called it good.

But this should be fixed/made easier.  I should probably report it in a bug…

One of my favorite features is the ability to add a 404 page.

Again, I’ve handled this in my own child theme using either a custom 404.php page with html or calling up a pageid built in Divi, but with Divi Toolbox you can do it from the GUI.  So nice…

You still have to build a page template, but you can do that with the Visual Builder and save it to the Library. 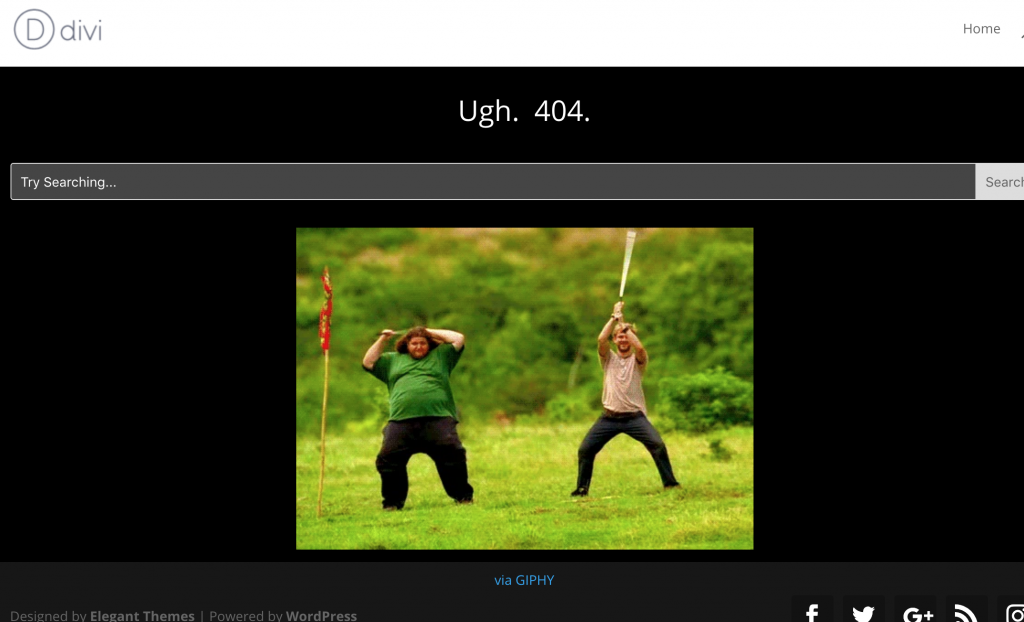 Too easy.  Like karate chopping a running man in the throat….

And those were just in the General tab options

There are really great Header options, like Change Logo on Fixed Menu (What!?  Awesome!) and Add CTA Menu Button (NOTE – currently works on the primary menu only).

And then there are some ‘insert before and after’ stuff that is pretty sweet.  You basically create Divi Library sections that you can ‘inject’ before or after various standard Divi sections, like navigation or footers. 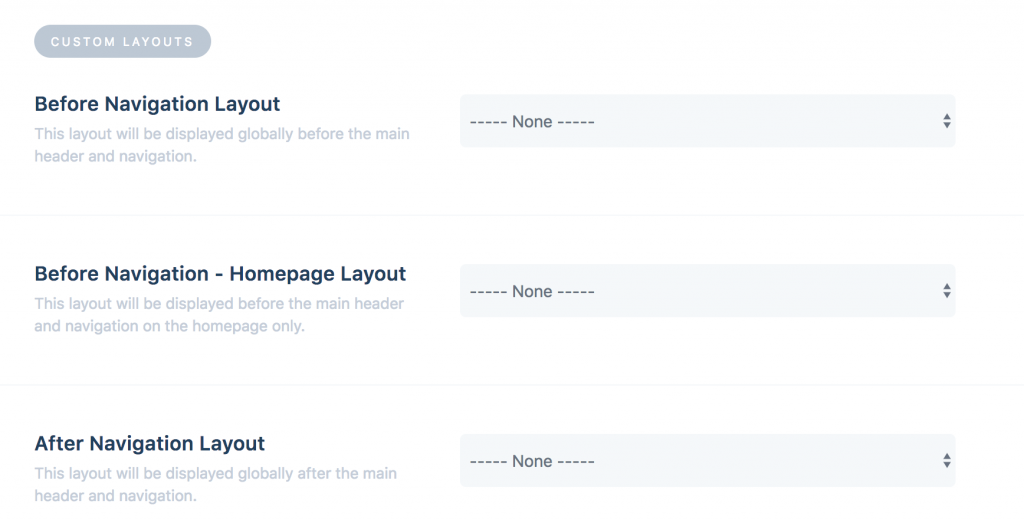 Google “Sticky Footer for Divi” or “Footer Reveal for Divi” and you’ll find lots of solutions that more or less provide the same solution.  But true to their selling statement, now you can do it without touching a line of code.

You can also inject stuff before/after the footer.

The most useful mobile feature, to me, is the ability to quickly set the mobile breakpoint.

I have to do this manually on lots of installs with a reasonably sizeable primary menu. And now I can do it from the GUI.

There’s actually quite a few mobile-sweet features, but just go check out 17:23 in Ania’s tutorial video.

In Ania’s video she says she really loves this feature and it looks beautiful, but I don’t want to use it, yet, and I’m not ready to rely on it or replace the native Divi blog workflow. Mostly because I like simple content in blogs, but also because Divi’s release schedule is on fire.

(But, pretty sure this is more a “Logan Problem” then it is anything else.  I hope others use the heck out of it…)

Other and Extra Modules

This section actually has the most ‘value’ to me because it feels ‘open ended’ – like have a really deep pocket on my literal toolbox.  All kinds of things can go in there and my hope is this is where future value will show up in future releases, especially in the ‘Useful Tweaks’ section. 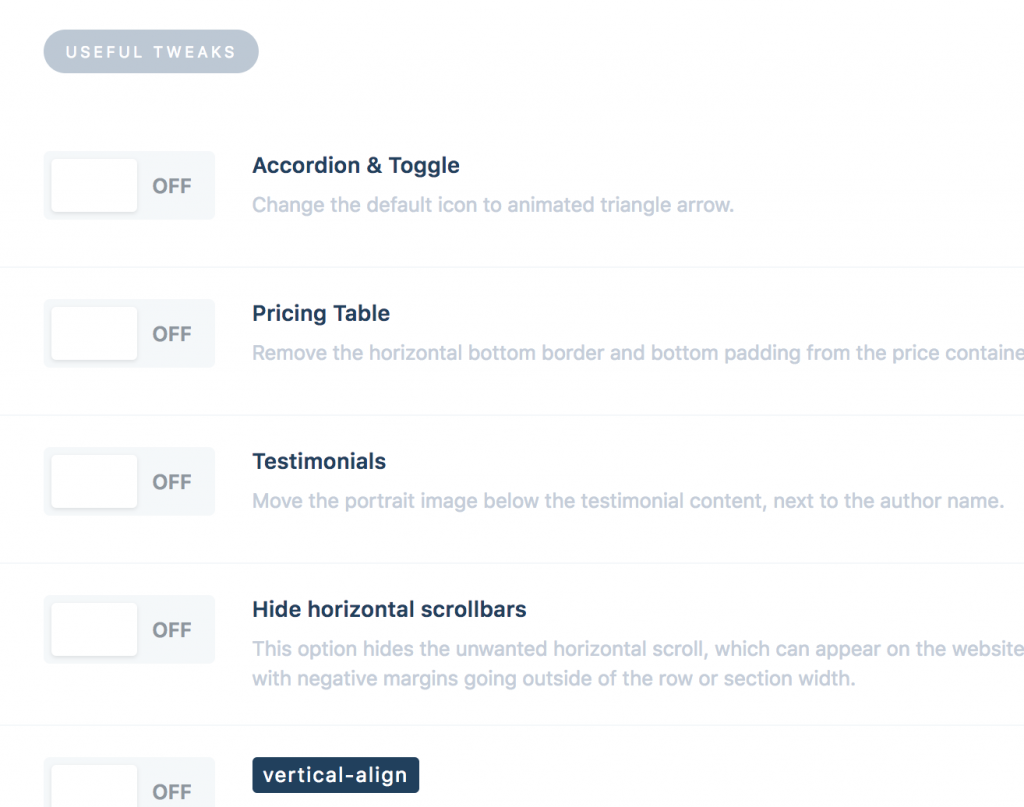 If you’re interested in Divi Toolbox, go watch the video above or on the official Toolbox homepage.  There are way too many features to write about and unlike other plugins that do one thing, Divi Toolbox has the ability to bring continuous value beyond what it does today.