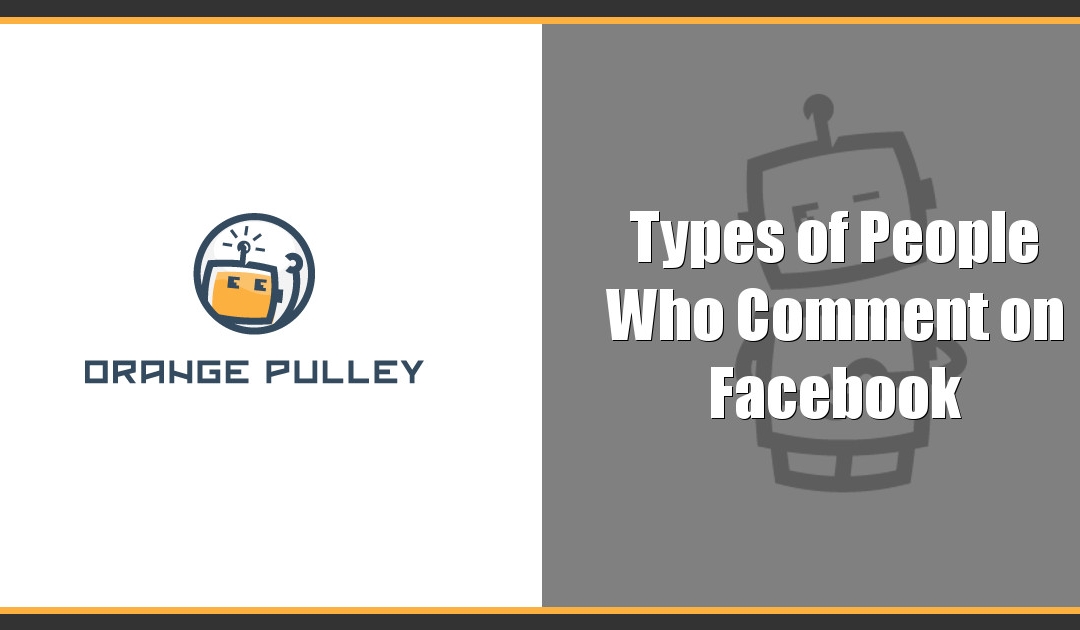 I like Facebook.  I’ve always liked it.  Other than Jesus, I can’t think of another thing that has done so much for getting people happily connected and living life together while at the same time pissing off millions of people for simply existing.

Friends become enemies, enemies become friends, but hopefully along the way everyone finds something that makes them laugh.

One of the things I continually laugh at on Facebook is people’s comments.

More than the post, I love reading the comments.

Mostly because I’m a snob and like judging others, but I’m also fascinated with humanity and how people think and as I read people’s comments I find myself bucketing them into several categories of humans, categories from which I’m now prepared to write about.

The scenario I’m mostly involved with on Facebook is tech groups, so I’m going to use that one as an example, but I imagine they apply generally as well, because at the of the day, non-tech people are jerks, too, right?

Comments (and there by commenters) are nothing without some context so, again, the context here is a post requesting help.  In a web development world the post often goes like this:

A simple plea for help asking for some guidance on how to do something (and usually something pretty straight forward.)  One might think a simple question would yield a simple answer, but nope, that’s not how people work, my friend. I mean, yes, certainly some comments are straightforward, but amidst that candid response things seem to devolve quickly…like from this type of person:

The Did You Google It Dude

Oh, dear, Lord.  Is there anyone more contemptuous than this guy?!  OBVIOUSLY they didn’t Google it and I understand how frustrating that must be to you personally, Did You Google It Dude, but who in all of Hades made you the Search Enforcer of the Internet?  Is your disdain for people who ask for help BEFORE trying to solve it on their own really so bad that you have to publicly shame them for taking a different approach than you in problem solving?!

How do I know? Because I’ve been that guy.  A lot.

Wait.  What. The. ??  No, Completely Unhelpful Guy, that does NOT help.  How the heck did you think that would help!?  Oh, you actually weren’t trying to help, you were just meeting your need to comment and be involved in every conversation on the Internet.  Gotcha.  In that case, carry on, Mr. Lonely.  Carry on.

“Seriously, you don’t know how do that?  Why are you even in this business!?”

If Did You Google It Dude is contemptuous then this guy is a word that isn’t made up yet for humans.  Nothing says ‘welcome to the group’ better then shutting down someone for asking a question…even a stupid one.

I think these people should categorically be removed from every facebook group they are a part of.

(I’m proud to say I’ve never been this dude…)

Mr. Pimp My Own Solutions

“Hi!  Yes!  I actually wrote about that here (link to solution)!”

Awe, look at you Mr. Over Achiever.  That’s so cute.  You’ve even gone so far as to having written up a solution for this.  Talk about being helpful!  However, you know what would have been equally helpful?  Linking to someone ELSE’s solution.  That thought ever cross your mind?  I doubt it.

How do I know?  Because, again, this has been me.

But unless I really think my write is unique and/or substantially better than everyone else’s in the world, I now link to other people’s site when I post recommendations.

“Actually, yes.  Try this and this.  Then once you’ve done that, be sure to add such and such.  Once that’s in place, you should consider this other thing over here, because it’s awesome. Lastly, and just points for style, but be sure to do this.”

Woah.  Dude.  You have way too much time on your hands.  Yes, that was helpful.  Yes, other people will find it useful.  But, holy “why you gotta show off like that, Batman?”  I mean, it’s one thing to answer thoroughly, but it’s something else entirely if your answer ends up using all six degrees of Kevin Bacon when you could have just got there in two.

And while I actually like Mr. Over Achiever more than most, he still bugs me…because it’s like looking in the mirror of a younger me that I’m happy is gone…

It should be obvious from this contemptuous, unhelpful, judgy-judgy, jerk-face, overachieving article that  I’m not the authority on comments on the web and, honestly, to each his or her own.  I’m writing this because it’s been awhile since I’ve written, I like SEO and fresh content, and I like writing.  Just because I’m categorically laughing at people’s comments doesn’t mean anything to anyone, but while I’m at it I do want to confess that over-time I’ve realized how selfish and silly so many of my posts and comments have been and I’m working on undoing that.

So now, in general, I follow these loose rules on commenting:

Did I miss anyone?  If so, let me know in the comments below!